Why do you sometimes encounter excruciating challenges before finally achieving that goal? Anthony Joshua faced pains before he won!

Published by TinuTino on December 8, 2019

Who said it is easy to achieve a goal without pains, challenges, or setbacks?

Let us use Richard Branson as an example; he did give a story of how he was once turned back for wearing an old pair of jeans to a night club meant for people in exalted places when he was young. From that evening, he decided to become successful but there were problems like hurdles which he blatantly jumped, just like multiply of successful people who faced challenges and disappointments along the way.

There is always a situation before success. No successful person will tell you that everything went well without pains or disappointment, that strengthened them. You should not give up because you will eventually get to that destination where your goals lie. 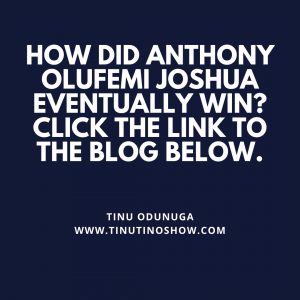 Let us take Anthony Joshua as another example: he has had a rough life where he was once charged to court for dealing in hard substance but the judge could see potentials in him, which eventually paid. He made mistakes back then,  After losing the last fight to his opponent, Andy Ruiz, he went back to face him in Saudi Arabia yesterday, December 6th, 2019, using Saudi Arabia as the frontier for such well-broadcasted fight. Due to Anthony’s determination. he won!

Don’t give up on your dreams

If you read his caption on his Facebook page, you will read where he explained his intention which is to encourage someone by telling them not to give up.  Today, Anthony Olufemi Joshua is now the two-time heavyweight champion! Congratulations, Anthony.

Anthony recognises his qualities and talents, that is why he never gave up.

Do you think it is easy to face punches, take punches, or any type of pain? He prepared his mind just to win his passion without taking into consideration how painful that would have cost him. 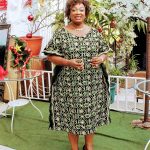 Try to take bear that in mind, believing that grace, profits, achievements, and glory, all come with excruciating pains. Once you achieve all, those pains will subdue. That is when you will realise that there is always a situation before success. Read more about the situation and success.

Anthony Joshua was beaten black and blue while his most treasured heavyweight title was grabbed from him but with that indomitable spirit, he went back to claim it. That’s how successful people once cried, fell, or got disappointed but never gave up. That’s how life is today. You learn skills of problem-solving like Anthony Joshua who studied the best skills to win Andy Ruiz. Please, don’t give up.

Categories: Uncategorized
Tags: Achievementsall come with excruciating painsand gloryAndy RuizAnthonyAnthony Joshua finally wonAnthony Joshua was beaten black and blue while his most treasured heavyweight title was grabbed from him but with that indomitable spiritAnthony Joshua was filled with the indomitable spiritbelieving that gracechallengesConsiderationDisappointmentDon't give upExcruciatingGloryGraceHow Anthony Joshua determined never to remain a loser. Who said it is easy to achieve a goal without painsIndomitable spiritJeansJoshuaor setbacks?ProfitsRichard BransonShare to inspire others and comment.Skills of problem solvingSuccessfulTry to take bear that in mindWho said it is easy to achieve a goal without pains or challenges or setbacks?Why do you sometimes encounter excruciating challenges before finally achieving that goal? Anthony Joshua faced pains before he won!