A mother and her little child who had brain tumour before 2 years of age!
How does a mother cope with the news or accepting that her child who is less than five-years-old has less than four and a half years to live on earth? Let us read on.
One day, I was posting some of my motivational quotes and updates on Facebook, when I stumbled on a video of a mother and her four-year-old child who was still in nappy, barely able to walk. Something captivated me instantly which was the love for such a sweet innocent girl who was battling with tumour in the brain. She had cancer!
Take note that you will need to stay motivated and focused during any situation, please do not lose hope. 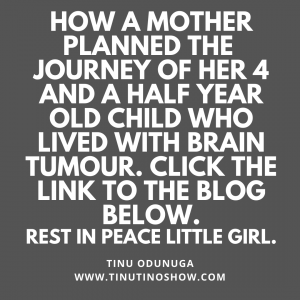 The child was taken to hospice eventually

Unknowing to some of us in the group, the mother has been narrating the brief journey of her little girl via video daily. the pretty girl has been mostly in and out of a hospital or barely able to giggle as the mother tried to give her the best joy in life before she says goodbye finally to this world.

Now, the mother decided to make those abrupt few years so special and extraordinary to the extent that she invited ginormous numbers of mums whose children had a similar disease or who love a little girl.  She shared a video each day on the girl’s journey during her hospital visits for blood transfusion, oxygen, oncology visits, check-ups, and more. The child would try to be funny sometimes with the mother who treated her so special and gave her the last opportunity to be happy on earth each day. Though you could see the deep visible scar on the child’s scalp. She once had long black curly hair before the baldness that exposed the deep cut in the scalp. It occurred during her final operation.
Suddenly, within one month that I joined the group, I got so attached to mum and daughter hoping the story was a drama because the girl so sweetly behaved during the times she was playing at home, rolling on the floor, gently kicking or cuddling her toys, been in coma off and on (felt so sad), on machines, oxygen, and tests.
Later, I realised that the group was formed about three years ago, the year 2016 to bring people who are going through synonymous disease together, show love for the little girl, show love to other mothers, and to send the little child off with love.
The little girl was eventually taken to hospice last night but she gave up the ghost this morning.
Really, sad. Why are some people hating and disrespecting each other when life has no duplicate? Life is ephemeral.

How did the mother try to cope with the news?

Don’t forget that at first, there will be anger, denial, depression (for some people), before acceptance of reality, though anything can occur within this linear. You can try to be among family and friends who love you well enough to understand your feelings and pain. So sorry if you are grieving right now.

The first step the mother took was to accept her fate after speaking to specialists and councellors, not accepting will be a big problem. This reminds me of when we heard the news that dad was going to die of prostate cancer, it was such devastation for mum and all of us. After accepting and crying well, it will prepare your mind for reality, unfortunately.

The mother took the following steps

Some of her patterns might help anyone going through such loss right now.