Can early breast screening save lives? People do have different stories to tell about breast cancer, but isn’t it better to be safe than sorry?

The awareness of breast cancer might make a situation better, but early breast screening is important. Yes, that’s the fact,  many people might be living with breast cancer without knowing some symptoms until their doctor confirm it. When you are aware of the difference with your breast without you ignoring warning signs of breast cancer, which might start with a lump, then you might be lucky.

A Friend died of breast cancer

Let me give you an example of a close friend who died of breast cancer and my experience of watching a patient undergo an operation of hysterectomy.  Anike was my childhood friend who enjoyed all the good things in life just like I do. she met a nice man back then after leaving an unhappy marriage but a few years later, something wasn’t perfect. I saw her last at a 70th birthday party of one of our friend’s mum did but she was okay without showing a sign of any illness. I remember before then she and I, parked our cars close to my house, so we can take a cab for an outing which was the last for her, unfortunately. It was a friend who called me one day and said sorry about the death of your friend, Anike, but it was a shock to me. He kept calling my name when I went silent, trying to digest the information and shock. Well, the problem is that my friend kept everyone far away while she was battling with the deadly disease of cancer which had spread everywhere. It was breast cancer! Rest in peace Anike and all those lovely women who have died in the hands of such deadly disease. Anike’s supposed long life became a  sudden Ephemeral.

In the operating theatre while a cancerous breast was been removed

During one of my charity tours in Delta state Nigeria, a friend (a surgeon and visiting professor)  partnered with my charity back then to raise awareness for early breast cancer screening, He is a professor and surgeon who owns a clinic for early screening of breast cancer. We sanitised and changed into theatre wears, taking note of every bit which I can store upstairs in my brain box, while I never for once stopped asking myself, how lucky or fortunate I am to be here alive. Oh dear, at the same time I wished I could use a magic wand to bring her out of such immense pain. Her breast was sliced, pulled, dragged, and cut until it came off. She lost loads of countable pints of blood. Her lifeless body showed she was particular about good health and she loved hair except for the hair on her head which was shaved. She survived after her breast was removed. The surgeon told me one thing that scared me, he said she would have lost her life if he didn’t return to check on her hours after the operation which some other doctors were supposed to attend to. Look at the way some women suffer? Really sad, Nigerian Hollywood, movie industry, lost another woman to breast cancer…….Aisha Abimbola. Rest in peace.

A little advice for women

Women, please go for your mammogram screening which is free in Britain once you hit 50 years and I am sure it might be affordable or free in other countries too. For those younger or those living in a different part of the world, press your breasts frequently and quickly visit a doctor once you feel any lump. It might be benign which isn’t cancerous but an early visit to the doctor helps. Also, if you donate to breast cancer research, soon there will be a way forward.

I send love to all those women struggling with breast cancer. 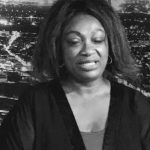