Published by TinuTino on 4 August 2019

A young man opened fire on thousands of revellers enjoying themselves in a night out on the weekend, killing nine people and leaving twenty-seven injured. That was the second mass shooting in the United States just less than 24 hours. The first shooting was in El Paso, Texas. What could have exacerbated that young man who was shot dead by the police eventually? Remember the importance of keeping away from toxic people who are filled with hate and negativity just like the shooter. 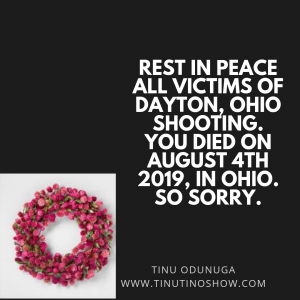 How it all happened and ended

It was around 1 a.m early hours on Sunday morning when a man armed with an assault rifle approached the Ned Peppers bar in Oregon District, where he opened fire on revellers who were enjoying themselves. Each night, thousands of people normally fill bars and nightclubs where they have always enjoyed themselves.

According to an eye witness, someone from Ned peppers grabbed the barrel of the long gun from the shooter, but the shooter picked up a handgun to continue the shooting until the police arrived and shot him dead. It took the police on patrol less than a minute to arrive and quell the deadly assault. Imagine the young 24-year-old man killed 9 people within a minute, leaving 27 others injured?

The gunman has been identified by the law enforcement officers sources has 24-year-old, Connor Betts from Bellbrook, Ohio. His sister was among those 9 people killed. Can you see what happens when some people refuse to be happy? Had been he was a happy person, he would have enough love to share!

Categories: Uncategorized
Tags: 1 a.m24-year-old24-year-old Cornor Betts from Ohio2727 people injured and 9 dead.According to an eye witnessBe happybut the shooter picked up a handgun to continue the shootingConnorDayton mass shootingDayton shootingDeadEl pasoEnforcementExacerbatedHappyHe killed his sisterHow it all happened and endedIn totalIt took the police on patrol less than a minute to arrive and quell the deadly assault.killed 9 people and injured 27killed 9 people and injured 27 in a mass shootingLess than 24 hoursLong hand gunMass shootingMay their souls rest in peace.Ned PeppersNightclubNine peopleNine people killed and twenty-seven injured in DaytonOfficersOhioOhio mass killingOhio. 9 people killedPolice onRevellerssistersomeone from Ned peppers grabbed the barrel of the long gun from the shooterTwenty-sevenWhat exacerbated a 24-year-old young man so much? A 24-year-old Cornor Betts from BellbrookWhat would have happened if the police did not arrive on time?

Too horrific to imagine. Rest in peace victims.