On the 3rd of August, which was yesterday, Saturday, a young guy about 21 years of age stormed the busy car park of Walmart shooting at customers including babies, children, and everyone before arriving at the main store, where he continued to open fire from aisle to aisle killing  20 people. He killed 20 people and left 26 people injured, but people fled for their lives. That day was a catastrophic day as many people left their belongings before fleeing the horrific scene.  It is important to leave a toxic clique otherwise your thinking will be negative. Unfortunately, those innocent people were visited by a toxic boy filled with hate, and poisonous reasoning.

According to Governor Abbott Greg, that was one of the deadliest attacks in history. It happened near the Cielo Vista Mall, a few miles from the United states Mexica border, in El Paso, Texas, around 10.40am local time.

Within six minutes, the police responded which led to the arrest of a 21-year-old young man known as Patrick Cuisius. He said that he hates the immigrants who are ‘animals’? That is sad and wrong. 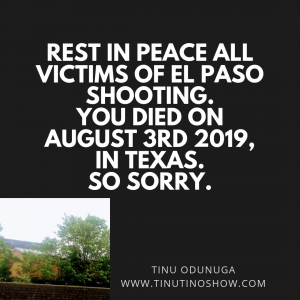 My point of view

We are human beings who should see beyond race, class, religion or gender. We need to show each other care, support, and love so that this world will be a more peaceful place filled with tranquillity. Live in peace culturally, socially and lovingly, by seeing the best in each other rather than stigma or condemnation. That young guy saw hate and nothing but hate without any love for himself either. Now he might face death sentence but will that bring back those innocent people he killed? Just unbelievable and unprecedented. Hours later in Dayton, Ohio, in another mass shooting, a 24-year-old young man killed 9 people, leaving 27 injured. Just too horrific to even imagine.

May the souls of the victims rest in peace.

Share and send your opinion too. How can such a deadly gun attack end?

We need to live in peace and unity.

[…] injured. That was the second mass shooting in the United States just less than 24 hours. The first shooting was in El Paso, Texas. What could have exacerbated that young man who was shot dead by the police eventually? Remember the […]