A Nigerian separatist leader, Nnamdi Kanu was arrested on 27th June and brought to Nigeria to face trial for charges such as treason, intimidation, criminal conspiracy and membership of an illegal organisation.

Political activist and leader of the Indigenous People of Biafra (IPOB) separatist movement, Nnamdi Kanu is accused of instigating violence in southeastern Nigeria that led to the loss of lives, properties of the military,  paramilitary, civilians,  and symbols of authorities according to Malami, the attorney general and justice minister. 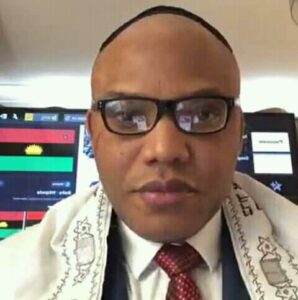 Nnamdi is a political activist and the leader of the indigenous people of Biafra (IPOB) separatist.

He believes in a new country for the Igbos (Southeasterners) only, without being part of Nigeria that he sometimes calls a zoo for many reasons like corruption, poor infrastructure, unemployment, lax security, hourly killings by Fulani herdsmen, corruption, bad governance, injustice as sufficed.

He refused to face trial on the 14th of October 2015  for an 11 count charge against him according to Malami, who also said that he appeared in court and his case was adjourned until 27th July 2021.

He refused to specify where Nnamdi was arrested before he was been brought to Nigeria to face trial.

Let us bear in mind that a bounty of 100 million was placed on Nnamdi if anyone could expose his whereabouts.

Malami said the collaborative efforts of the Nigerian intelligence and security services made it possible to arrest him.

This has caused raucous and uproar in the country especially among people from his circle.

Why has he (Nnamdi Kanu) been labelled a terrorist and all efforts were used to make sure he was arrested while the Fulani herdsmen and Boko haram terrorists who are killing and kidnapping innocent people daily are not priorities?

The king of Oyo Alafin is dead!  Oba Lamidi Adeyemi was the king of Oyo for 52 years  until he died yesterday, the 22nd of April 2022. He was known to have a crave for Read more…