Why are more haters of Omoyele Sowore mostly from the North of Nigeria? Is this a religious or tribal conflict?

Published by TinuTino on 8 December 2019

What is really going on with Omoyele Sowore and the government of Nigeria?

On August 3rd, Omoyele Sowore was charged with treason for calling for a demonstration against President Muhammadu Buhari’s government, although it seems additional charges like cyberstalking and money-laundering have been brought to light?

Before I begin,  I have nothing against Muslims or the Northerners, No, I  rather find it disturbing that it seems some people are supporting the president of Nigeria because of tribal and religious similarities. They are attacking Sowore and his supporters only due to tribal or religious basis instead of them to be factual and objective. Sentiments cannot heal Nigeria. They base their reasonings on tribe and religion which is absurd.  Nigeria is for everyone, not a section. There must be freedom of speech which seems to be quelled by those in power.

When you read most unprintable and insensitive comments on Sahara reporters’ thread or other platforms relating to Omoyele’s case, those comments are from northerners, who are Muslims. Is Sowore’s case based on tribalism and religious conflicts? Although, other tribes with a different religious background are also some of those who despise Sowore. Is Sowore truly the enemy of Nigeria? What did you say about Boko Haram terrorists, Fulani herdsmen, kidnappers, ritual killings by some men and women on top,  and those corrupt politicians who send their children abroad, but hiring youths to kill and maim with measly pay?  All these atrocities Sowore boldly stood up against.

One day, the truth will prevail.

Start seeing each other as human beings without religious or tribal differences.  Are you happy with Nigeria of today?  Prevalence of crime and unemployment while inflation of food sends some people to an early grave, not forgetting lax security.

Oh dear!  Sometimes, it sounds like sycophants are being more sentimental than being objective, they should not support ills of any president but rather point out his fault for amendment. 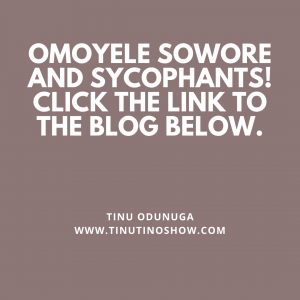 The world is in an appalling state

When a Yoruba man was in power, more Yoruba people supported, just like the days of former president Ebele Jonathan, more people from his tribe supported him. The damage is that sycophants are only noisemakers who never point out the faults of their president neither will they suggest a way forward. All they care about is digging out rancor!

More than tens of thousands of people have been killed by Boko haram, two million misplaced including Christians, traditionalists, and Muslims. Why can’t everyone unanimously fight corruption, and poor leadership, at the same time remind the president and his administration that we must end Boko Haram sect, kidnappings, killings of innocent people, weak security, inflation on food, unemployment, injustices, and other crimes?

Share and send in your opinion about Sowore and the government, also, a way forward to a better Nigeria.

Categories: Uncategorized
Tags: a way forward to a better Nigeria.All they care about is digging out rancor!AlsoAppallingBarbarismBoko HaramChildren abroadColonialismCorruptionCyberstalkingFulani herdsmenGraveHow can all tribes and religions in Nigeria focus on rebuilding the country rather than hating Sowore? His haters are mostly NorthernersI  rather find it disturbing that it seems some people are supporting the president of NigeriaI have nothing against Muslims or the NorthernersInflationJonathankidnappersKillingsLegacyMeaslyMoney launderingMuhammadu BuhariNoObjectiveOmoyele SoworePoliticalPresident BuhariPrevalenceread his threadRebuildingRitual killingsritual killings by men and women on topSahara reporters platforms and haters of SoworeSentimentsShare and send in your opinion about Sowore and the governmentSorry stateSowore and sycophantsSycophantsTens of thousandsThere must be freedom of speech which seems to be quelled by those in power.those comments are from northernersWhat did you say about Boko Haram terroristsWhat is really going on with Omoyele Sowore and the government of Nigeria?When you read most unprintable and insensitive comments on Sahara reporters thread or other platforms relating to Omoyele's casewho are MuslimsWhy are more haters of Omoyele Sowore mostly from the North of Nigeria? Is this a religious or tribal conflict?Why are sycophants always supporting bad governanceWorld is in a sorry stateYoruba