The former TV presenter of Love Island, Caroline, is gone! How did she die?

It seems that many people are assuming that pretty faces or dandy looking men on TV are all living in a happy world behind the camera. Sadly, it is not so at all in most cases.

Some of them are battling with some medical problems like mental health problems, cancer, or any type of illness.

Sadly, in the case of Caroline Flack, the former TV presenter of Love Island, was battling with depression but unfortunately, she took her own life according to reports.

There is no human being who doesn’t have one problem or the other. We all struggle in life. 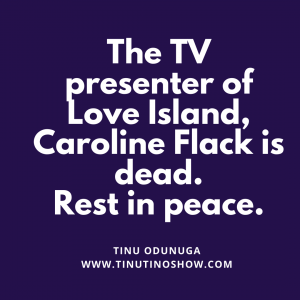 Caroline was described as a bubbly young woman who also formerly presented Love Island, Strictly come dancing and X-factor. She was loved by her friends and family.

She was arrested on the charges of assaulting her boyfriend at a stage, she had a mental health problem.

Her friends believe the tabloid, media, and trolls, were so harsh on her mistakes, neglecting the fact that she was battling with mental health problems.

She committed suicide on the 15th of February, in her house in East London, at the age of 40! Rest in peace pretty Caroline Flack.