Kobe Bryant, an NBA icon, his 13-year-old daughter died yesterday among other nine people in a helicopter crash

Who prays to watch his or her loved one suddenly die at a tender age? Especially when the person was once an icon and reputable role model who impacted ginormous numbers of lives worldwide?

Sadly, Kobe was such an icon to be remembered for a very long time. He died along with his daughter, and other good people on Sunday morning, 26th January 2020. It is such a shattering incident.

How terrible to hear that his 13-year-old adorable daughter, Gianna also died in the crash!

Who was Kobe Bryant?

Kobe Bryant was an American professional basketball player who was born on August 23rd, 1978. He was a  shooting guard, who played with Los Angeles Lakers and won five NBA championships.

For those who loved Kobe so much, they kept reminding people of how he inspired a lot of people. Kobe believed in motivation while he made it known that he cannot tolerate lazy people.

The helicopter carrying Kobe, his daughter, Gianna, and eight other people crashed into a hillside in Southern California on Sunday.

Rest in peace Kobe Bryant and all those who died in the helicopter yesterday.

Many people worldwide mourn with his wife, children, friends, and family. 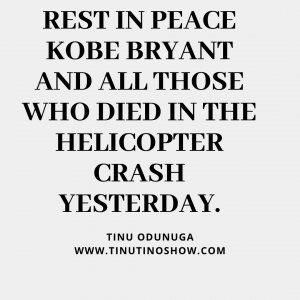