Kolade Johnson escaped xenophobic attack in South Africa, only to be killed by a police officer unlawfully in Nigeria. Was it a mistake?

Published by TinuTino on 8 April 2019

Last week Sunday, Ogunyemi Olalekan, a Nigerian policeman killed innocent Kolade Johnson who once lived in South Africa. Kolade was a friendly and quiet young man according to his family. He escaped the xenophobic attack in South Africa only to be brutally killed by a policeman who had no reason to kill him. The policeman said it was a mistake. 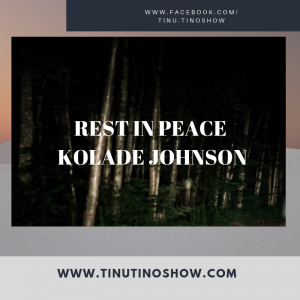 Police brutality in Nigeria has to end

Police brutality in Nigeria must end, since there is a ginormous history of police brutality on innocent Nigerians, especially on the youths and the poor.  Special Anti-Robbery Squad (SARS), Special Anti-Cultism Squad (SACS), police officers and Soldiers, are mostly guilty of impatience and violating human rights.  Can we advise that police officers in Nigeria, should move around without guns or weapons? Bear in mind that criminals are prevalent in many corners and angles, ready to kill or attack monstrously.

After Kolade had his lunch, he told his elder sister whom he stayed with at that time that he was going to the end of the street to watch the football match, but unfortunately, he did not return. According to Kolade’s elder sister, Toluwani Lukman, he lived in South Africa for five years, where he focused on his music career until the dark day. After he was shot twice by the police officer, he was rushed to the hospital where he gave up the ghost while waiting for treatment. How devastating?  His father, sister, fiancee and the rest of the family, plus relatives and friends are mourning right now which is understandable.  He and his fiancee were planning their wedding! Very painful. Can you blame those sympathetic Nigerians who are now calling for SARS unit to be scrapped permanently after a series of similar unlawful killings of innocent Nigerians?

The police officer and his colleague who mistaken poor Kolade as a cult member are both detained.

Rest in peace Kolade Johson and all innocent victims who were killed unlawfully by unprofessional and callous police officers.

Categories: Uncategorized
Tags: a police officer in NigeriaBear in mind that criminals are prevalent in many corners and anglesBoth detainedCallousDevastatingElder sisterespecially on the youths and the poor.FamiliesFatherFianceeFive yearsFootball fanGinormousHuman rightsKolade Johnson escaped xenophobic attack in South AfricaKolade Johnson was a football fan who was killed after watching a matchKolade JoladeMusic careerNigeriansOgunyemi OlalekanOlalekanonly to be killed by a police officer unlawfully in Nigeria. Was it a mistake?Planning weddingPolice brutality in Nigeria has to endPolice brutality in Nigeria must end since there is a ginormous history of police brutality on innocent NigeriansPolice brutlity in Nigeriapolice officers and Soldiers are mostly guilty of impatience and violating human rights.Read about the heartbreaking story of Ogunyemi Olalekanready to kill or attack monstrously.Rest in peace Kolade JohsonRest in peace Kolade Johson and all innocent victims who were killed unlawfully by unprofessional and callous police officers.SarsSARS unit to be scrappedSpecial Anti-Cultism Squad (SACS)Special Anti-Robbery Squad (SARS)Toluwani LukmanUnderstandableUnlawful killings of innocent Nigeriansunlawfully killed KoladeUnprofessionalVery painfulwho unlawfully killed Kolade Johnson while he went to watch football.Xenophobic attack