Why did a 28-year-old terrorist walk into two mosques in Christchurch in New Zealand and shoot 49 innocent worshippers dead? Leaving 20 people injured.

After 157 people were killed in Ethiopian Airlines Boeing 737 max 8 on March 10th, we also received sad news that over 110 people  (including 100 children) were in a collapsed three-storey building in Nigeria this week, which over 20 children are dead. While people were sober, trying to digest such overwhelming pains, suddenly a terrorist walked into two mosques in New Zealand, shot and killed about 49 people for no reason. What is happening really? How can a human being kill innocent worshippers out of hatred without a conscience? The man even streamed the killing on Facebook?

Babies, grown-ups, and elderly people were in both mosques praying when a terrorist shot 49 people dead

The terrorist has been planning this devastating attack for months. He carried out the attack on two mosques in Christchurch in New Zealand. It is so painful to even imagine anyone can be this bitter and hateful. It is time we all unanimously work together as one family in combatting terrorism, which hasn’t got anything to do with your religion or race. 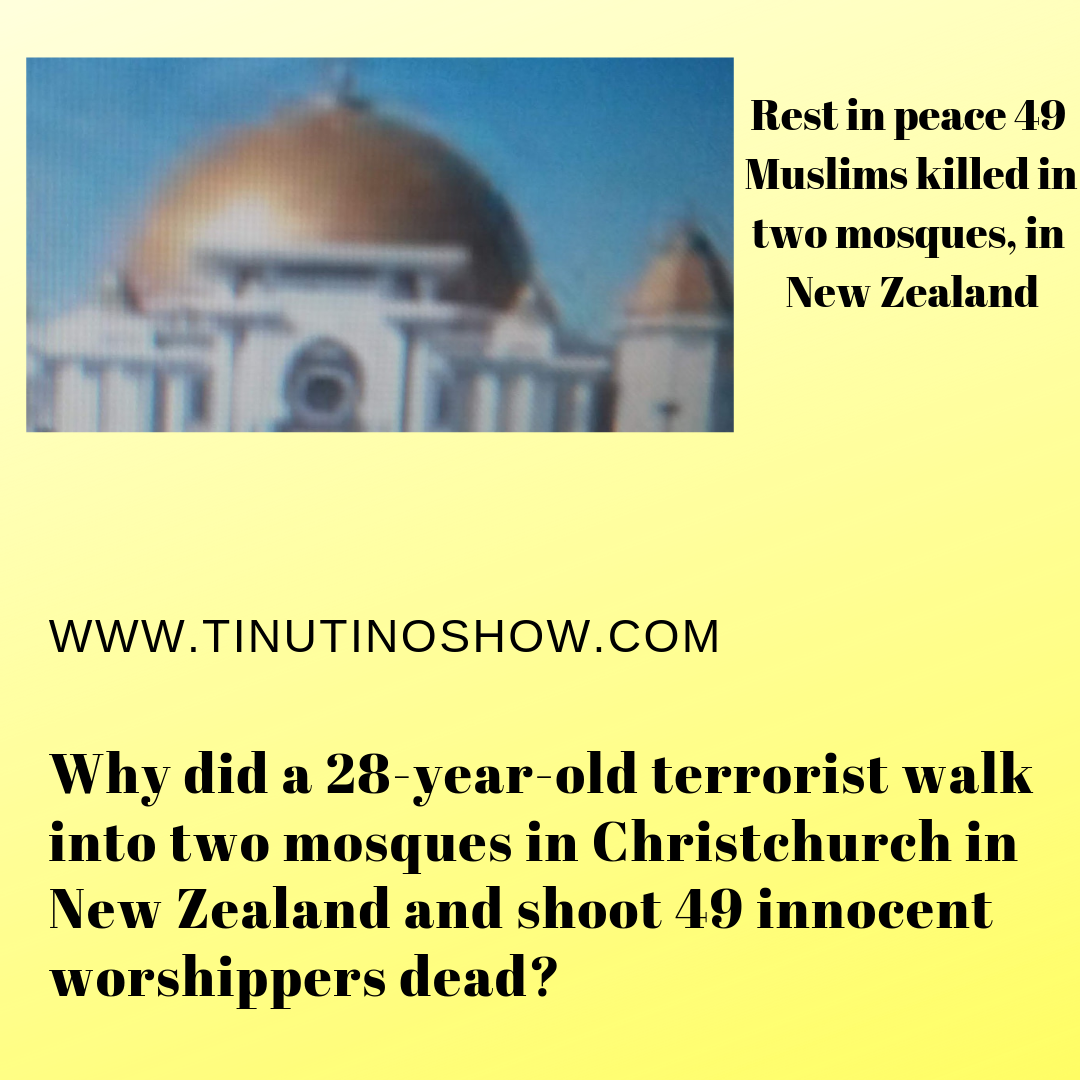 Let us mind our comments and posts on social media

I have said it before that some people are really depressed and filled with hate, so be careful what messages you share. Some people post hateful and provocative messages which get heated to the extent that some people begin to threaten each other with death threats. You don’t know who is on the other side. Let us begin to be careful and vigilant so that all those terrorists online can be exposed and prosecuted. I am so sorry for such a loss. May the souls of 49 people rest in peace and I hope the sick gets strong. The prime minister of New Zealand, Jacinda Ardern reported that this can only be described as a terrorist attack. She said it is one of the darkest days in New Zealand’s history. The terrorist who killed 49 people, is a 28-year-old man.

Categories: Uncategorized
Tags: 100 children49 people killedAfter 157 people were killed in Ethiopian Airlines on March 10thand elderly people were in both mosques praying when a terrorist shot 49 people deadBabiesBoeing 737 max 8Breaking news on how a 28-year-old terrorist walked into two mosques in Christchurch in New Zealand and shoot 49 innocent worshippers dead?ChristchurchCombating terrorismCommentsDarkest days in ZealandDeathDeath threatsExposedFamilygrown-upsHatefulHeatedHow a terrorist killed innocent 49 Muslims in Christchurch in New Zealand?How can a human being kill innocent worshippers out of hatred without a conscience?I am so sorry for such a lossI hope the sick gets strong.is a 28-year-old man.Jacinda ArdernLet us begin to be careful and vigilant so that all those terrorists online can be exposed and prosecutedLet us mind our comments and posts on social mediaMay the souls of 49 people rest in peaceMessagesMosqueNew ZealandPeoplePostsProvocative messagesRaceReligionRest in peaceshot and killed about 49 people for no reason.Social mediaStrongsuddenly a terrorist walked into two mosques in New ZealandTerrorists onlineThe man even streamed the killing on Facebook?The prime minister of New ZealandThe terrorist who killed 49 peopleThreatenThree-storey building collapsed in NigeriaTruly sadtrying to digest such overwhelming painsTwo mosques in New ZealandUnanimouslyunanimously work togetherwhich over 20 children are deadWhile people were soberWhy did a 28-year-old terrorist walk into two mosques in Christchurch in New Zealand and shoot 49 innocent worshippers dead? Leaving 20 people injured.Work together