Do you know that man who has been brutally beaten or abused by his partner, can be your brother or son? Some men do suffer abuse from women!

Oh yes, sadly, some men do get abused by their female partners

Well, why do a handful number of men find it hard to believe that as much as we hear about women beaters, there are men beaters too? You heard me right, there are women who actually take joy and pride in beating their partners or spouses without regret. Such women do not show remorse, unfortunately, while those victims might be too embarrassed to express themselves in full details to authorities. In Africa for instance, let me take Nigeria, for example, if a man report such incident to the police be rest assured that some police officers will ask him again to repeat himself. In the United Kingdom here, there are few shelters for battered men, so if you are in a dangerous situation please boldly report to authorities. We do hear horrific 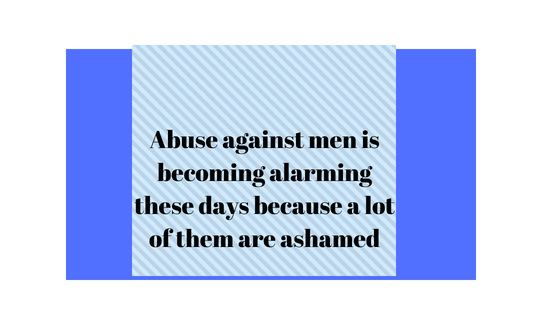 Some of those women who abuse or batter men do give stories of their previous abusive stories which is not an excuse to batter or abuse men. When there is bitter conflicts or continuous abuse in a relationship, it is time to think twice!

Abuse of men is becoming alarming these days because a lot of them are ashamed. Do not mock your relation or brother or friend who tells you his partner has been abusing or beating him up, as he might be in a sensitive stage where his self-esteem is low. Such men might feel suicidal or depressed.

Women who abuse men or beat them should be prosecuted the way men are prosecuted for any kind of abuse, knowing it is wrong and diminishing.

Listen to that man who cries out.

A lot of men i have sat with in a forum will always deny that there are batterd men out there. they are so full of egoistic responses thst i sometimes ask if ignorance is clearly written on their forehead or not. How can you not believe that some men can never slap a woman back talk less of beating her.

Categories: Uncategorized
Tags: AbuseAbuse against men is becoming alarming these days because a lot of them are ashamedAbusedAbusiveAfricaas he might be in a sensitive stage where his self-esteem is low.AshamedAuthorities.BatterBeaten upbeatingbittercan be your brother or son? Some men do suffer abuse from women!ConflictsContinuous abuseDangerouslyDepressedDiminishingDo not mock your relation or brother or friend who tells you his partner has been abusing or beating him upDo you know that man who has been brutally beaten or abused by his partnerFemaleKillinglowMaleMockNigeriaProsecutedRelationRelationshipRemorseSelf esteemsuicidalUnpredictableWhen abuse becomes too much one of them might turn dangerously unpredictablewomen-beaterswomen.

It is really wrong and sad. Either women beater or men beater!