Congratulations to Joe Biden as the 46th new president of America. Why isn’t Trump conceding?

Joe Robinette Biden wins the presidency of the United States of America, leaving many Americans elated and satisfied. His running mate, Kamala Harris of California, makes history as she becomes the first female black woman who will serve as the vice president of America.

Though Biden turns 78 this November, leaving him the oldest to serve as president, he is bent on bringing everyone together in unity.

On November 8th, Joe Biden was elected the 46th president of America, with millions of Americans believing in him. Kamala Harris also proudly congratulated him, among ginormous numbers of well-wishers around the world.

Biden supporters are jubilating and expecting a transformation, while the supporters of Donald Trump gathered to protest. Trump is not conceding though. 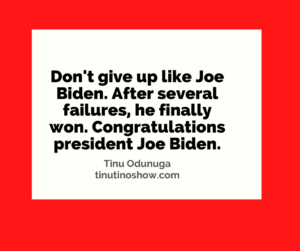 His refusal to concede has left the grand old party (G.O.P) divided and confused, but the opponents are not perturbed.

Some people define the four years of Donald Trump, the incumbent president as tempestuous.

Millions of Americans who were uncomfortable with him (Trump) obviously voted against him.

He is unhappy,  he (Mr. Trump) is only the third elected president since World War II to lose re-election, one of the reasons why he threatens to take it to the Us supreme court.

Most voters were women of colour, dissatisfied republicans, children, women among many others.

Regardless of Trump’s bitter feelings, his decision doesn’t erase the fact that Joe Biden is the new president of America.

Joe Biden struggled many times to contest, but after several failures of being the president of America, he finally won. That is grit and determination!

Credit (flag from the internet).

Categories: Breaking newsCelebrationLife and happenings
Tags: 2020but after several failures of being the president of AmericaCaliforniaCongratulations to Joe Biden as the 46th new president of America. Why isn't Trump conceding?DeterminationDonald TrumpElatedFour yearsGOPGrand old partyGrithe finally won. That is the grit!Joe BidenJoe Biden struggled many times to contestJoe Biden was elected the 46th predident of AmericaKamala Harrisleaving Trump disgruntledOn the 8th of NovemberRobinetteTempestuousTransformationTrumpwhat is Trump doingWhile millions of Americans are jubilatingWhy is Trump refusing to concede as Biden wins the US election