Why is religion based on extorting money from members of churches or mosques today?

When people discussed religion in the past, it was more in a peaceful environment than a society today, which is full of hate. You can’t pretend to notice the high request or ridiculous demanding of money from pastors and imams who believe you must feed them. I am not sure if it is unholy for most of them to work. 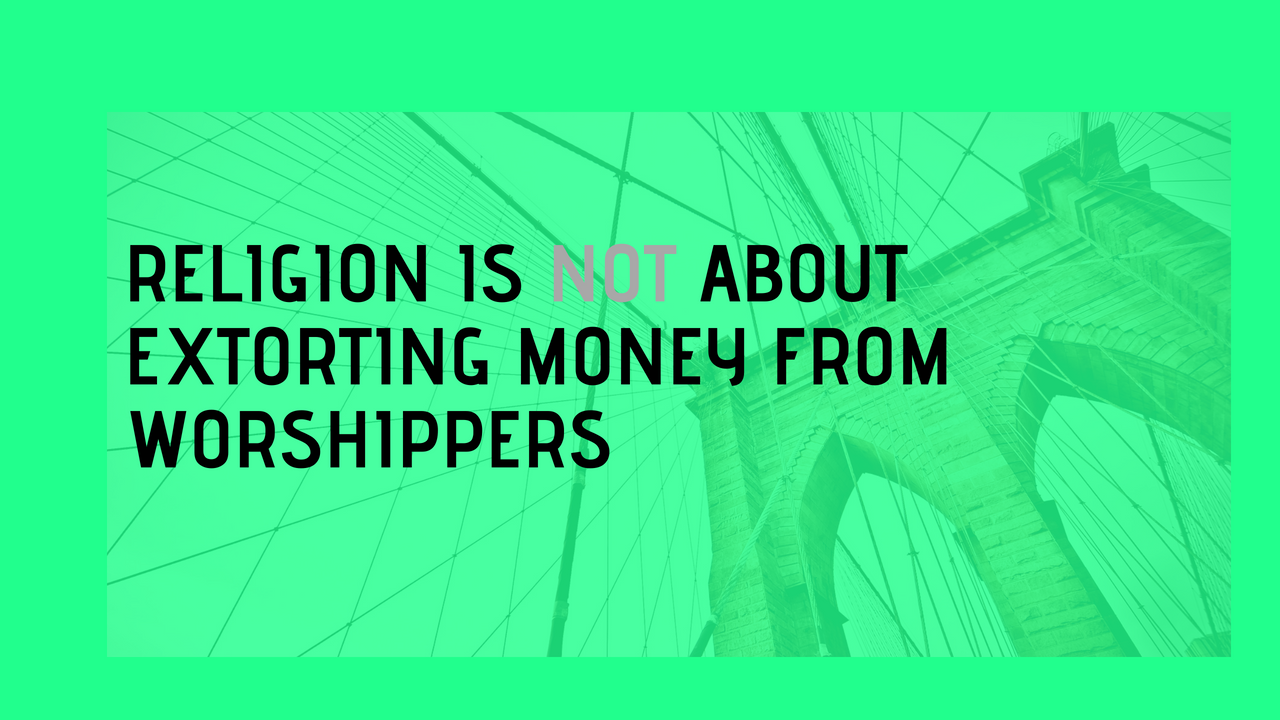 Where are the true qualities of religious people

You know how it used to be so nice listening to a religious person in the past. In fact, through their behaviour, there’s no one need to tell you that they are either Christians or Muslims as you will evidently see from their character and utterance. They were never money conscious or full of hate. Rather, they were humble, honest, trustworthy, kind and loyal. Sadly, it seems there’s a difference today! Look around you to confirm the huge differences.

Christian and Muslim leaders were respected in the past

It seems a lot has changed today unlike before when religious leaders were more respected. A lot constituted to that, let’s remember that today, more fake pastors and imams are been exposed publicly.

Why is Christianity or Islam about money, rather than praying? Some religious leaders always ask for money ridiculously out of their selfishness. Imagine a woman asking for $1.000 each from as many people as possible in a country (Nigeria) where 76% of young people live in unpleasant situations?

In the past, pastors, and Imams were so respected with uprightness but today, their behaviour really shocks many people. Why are we folding arms while many people are pushed into crimes, some marriages end up bloody since a partner easily kills the other because imam or pastor says, have patient and pray, there’s more crime and hate, regardless of many churches and mosques been built each day.

Religion used to be so peaceful and rewarding in the past.

What is the way forward?

Categories: Fake pastorLife and happeningsNigeria
Tags: $1.00076%BehaviourBloodyCharacterChristian and Muslim leaders were respected in the pastChurchesConsciousConstitutedCrimeDifferencesEvidentlyExposedExtortingfakeHateHugeHumbleImamImamsIn the pastis it the same?KillingsKindLoyalmany pastors and imams rather focus on extorting money from their members rather than sharing godly wordsMembersMoneyMosquesPastorPastorsPatientPeople. KillsPrayPubliclyPushedReligiousRespectedRidiculouslySituationsTodayTrustworthyUnholyUnpleasantUprightnessUtteranceWhere are the religious pastors and imams we had in the pastWhere are the true qualities of religious peopleWhy is religion based on extorting money from members of churches or mosques today?

Why do most pastors money focus on tithes? Pay your tithes and offerings and give charity to the poor only if you can afford it, not if you are imposed on - The Tinu Tino Show · 27 July 2018 at 1:51 PM